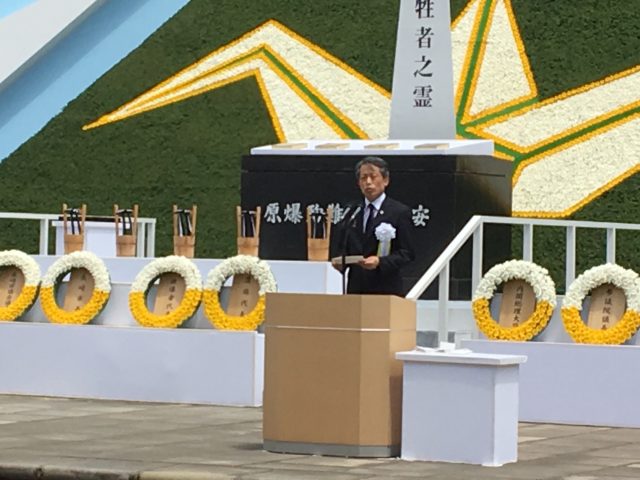 I wish to convey my solidarity as you gather for this peace ceremony to honour the victims of the devastating atomic bombing of Nagasaki seventy-one years ago. I am grateful to the city of Nagasaki for organising this ceremony and keeping fresh in our minds the horrific human toll caused by nuclear weapons.

You have come together to mourn those who perished in the bombing and suffered through its horrendous after-effects. But your gathering is also a powerful reminder to the international community to spare no effort to ensure such a tragedy never happens again.

Peace-loving people in Nagasaki and from around the globe gather to remember those who perished at the hands of a weapon that did not discriminate between gender, age, religion, ideology or nationality.

Throughout its history, Nagasaki has been a vibrant and diverse city. When I visited in 2010, I was inspired by the dynamism of the city and its people and stirred by their determination to build a world free of nuclear weapons. That commitment is led by the courageous survivors – the Hibakusha.

In one voice, the Hibakusha have taken their message to the world: No more. Never again.

It is a message that must be repeated until we have reached our shared goal of the elimination nuclear weapons.

As the Hibakusha grow older, a new generation must assume the role of messengers of peace.

I call on the young peace makers of Nagasaki to rise to the challenge and ensure that the suffering caused by nuclear weapons is never forgotten. Spread the word with your peers around the world. Your generation did not invent nuclear weapons, but you can be the generation to eliminate them. The United Nations stands with you in striving to achieve a nuclear-weapon free world.

Together, let us remember the victims of nuclear weapons and recommit to building a safer and more secure future for all.