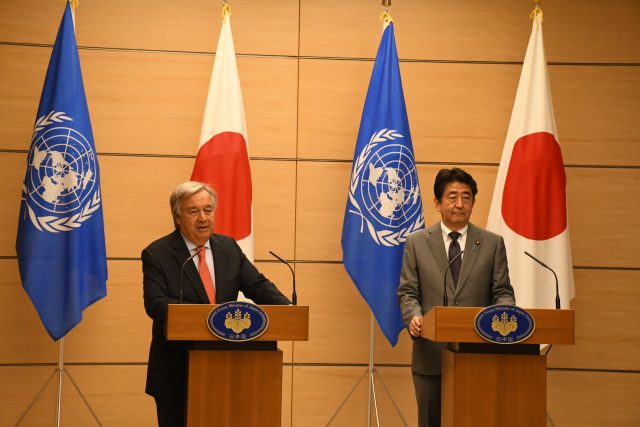 First of all, I would like to thank Prime Minister [Shinzo] Abe for his very, very warm welcome.

Japan is a fundamental pillar of multilateralism in today’s world. Japan is a very staunch supporter of the United Nations and I want to express my deep gratitude and admiration for that.

Since I joined the United Nations many years ago, I have been coming to Japan at least once a year, but this visit has a very special meaning.

I am here to express my deep solidarity with the Japanese people who were victims of the two only atomic bombs that until now have exploded. And to pay tribute to the resilience of the Japanese people and especially of the victims, and to say that the voice of the hibakusha is a fundamental message for peace. “No more Nagasaki, never more Hiroshima, not any more hibakusha being necessary” is also the message of the United Nations.

And this expression of solidarity and this tribute to resilience come in a very important moment for us because, on the one hand, we are totally committed to the denuclearization of North Korea, and, on the other hand, we have just launched our initiative on disarmament.

As Secretary-General of the United Nations, I am obviously totally committed to the implementation of all relevant Security Council resolutions on North Korea.

And I fully support the negotiations taking place between the United States and DPRK [Democratic People’s Republic of Korea] with the objective that we all share to see a total denuclearization that is verifiable, that is irreversible, to make sure that North Korea can be a normal member of the international community in this region.

And we also fully support the Japanese initiative of dialogue with North Korea, and, in particular, I want to express my full solidarity with relation to the situation of the abductees, that I consider to be absolutely unacceptable in today’s world.

We recently launched in Geneva an initiative on disarmament with three dimensions.

Disarmament to save humanity, in which, of course, the central objective is to have a world totally free of nuclear weapons. And we are completely committed in order to make sure that non-proliferation is not put into question, and the North Korea and the Iran situations are two central aspects of our concerns to make sure that we preserve non-proliferation, but also recognizing that non-proliferation needs to be accompanied by effective disarmament, progressive disarmament measures in the nuclear dimension. And, at the same time, the full implementation of the ban on chemical weapons and biological weapons.

It is also disarmament to save lives, taking especially into account what conventional weapons are doing with devastating impact on civilian populations in urban centers, and disarmament for the future generations, namely to make sure that we do not develop arms, systems of arms, that fully escape the control of human beings and responsibility of human beings.

And expressing these feelings in Nagasaki has a very emotional meaning for me, as Nagasaki was the place where the first Portuguese came in the 16th century.

I want to express my deep gratitude for Japanese leadership in disarmament, but also in relation to the implementation of the Sustainable Development Goals, in the fight against climate change, in the promotion of human rights, and in all aspects of UN activities.

And with Japanese support, I remain totally committed to UN reform, and I also fully agree that there is no UN reform that is complete without reform of the Security Council in order to fully guarantee its legitimacy and its efficiency.