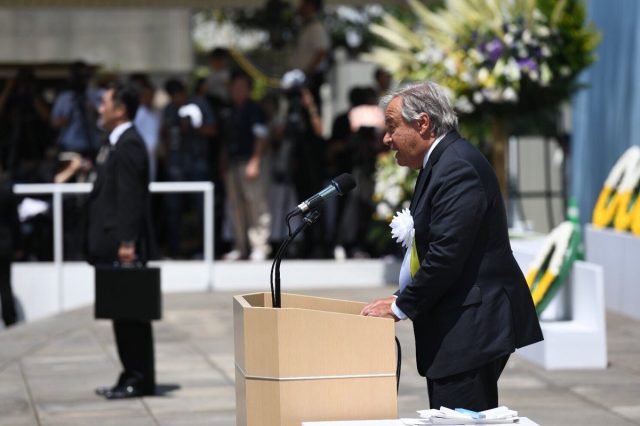 It is a privilege, as Secretary-General of the United Nations, to be here with you to commemorate the women, men and children killed by the nuclear attack on Nagasaki on 9 August 1945.

I convey my deepest respect to everyone here today, and to all the victims and survivors of the atomic bombings.

It is a great personal pleasure to be here in Nagasaki. My country, Portugal, has deep political, cultural and religious ties with this city, going back nearly five centuries.

But Nagasaki is not just an international city with a long and fascinating history. It is a global inspiration for all those who seek to create a safer and more secure world.

This city, your city, is a beacon of hope and strength, and a monument to the resilience of its people.

The atomic bomb that killed and injured tens of thousands of people in the immediate aftermath of the blast, and in the years and decades that followed, could not crush your spirit.

The survivors of Nagasaki and Hiroshima, the Hibakusha, have become leaders for peace and disarmament here in Japan and around the world. They are defined not by the cities that were destroyed, but by the peaceful world they seek to build.

From the other side of the apocalypse, the Hibakusha have raised their voices on behalf of the entire human family. We must listen.

Sadly, 73 years on, fears of nuclear war are still with us. Millions of people, including here in Japan, live in a shadow cast by the dread of unthinkable carnage.

States in possession of nuclear weapons are spending vast sums to modernize their arsenals. More than $1.7 trillion dollars was spent in 2017 on arms and armies – the highest level since the end of the Cold War. That is around 80 times the amount needed for global humanitarian aid.

Meanwhile, disarmament processes have slowed and even come to a halt.

Many states demonstrated their frustration by adopting the Treaty on the Prohibition of Nuclear Weapons last year.

Let us also recognize the persistent peril of other deadly weapons.

Chemical and biological weapons of mass destruction, and those being developed for cyberwarfare, pose a grave threat.

And conflicts fought with conventional weapons are lasting longer and are becoming more deadly for civilians.

There is an urgent need for disarmament of all kinds, but especially nuclear disarmament.

This is the backdrop to the global disarmament initiative that I launched in May.

Disarmament is a driving force for maintaining international peace and security. It is a tool for ensuring national security. It helps to uphold the principles of humanity, promote sustainable development and protect civilians.

My agenda for disarmament is based on concrete measures that will lower the risk of nuclear annihilation, prevent conflict of all kinds, and reduce the suffering that the proliferation and use of arms causes to civilians.

Here in Nagasaki, I call on all countries to commit to nuclear disarmament and to start making visible progress as a matter of urgency.

Nuclear-weapon States have a special responsibility to lead.

Let Nagasaki and Hiroshima remind us to put peace first every day; to work on conflict prevention and resolution, reconciliation and dialogue, and to tackle the roots of conflict and violence.

Peace is not an abstract concept and it does not come about by chance. Peace is tangible, and it can be built — by hard work, solidarity, compassion and respect.

Out of the horror of the atomic bomb, we can reach a deeper understanding of our irreducible bonds of responsibility to each other.

Let us all commit to making Nagasaki the last place on earth to suffer nuclear devastation.

I will work with you to that end.