The following statement by UN Secretary-General Ban Ki-moon was issued on 11 March:

The world is shocked and saddened by the images coming from Japan this morning.

On behalf of the United Nations, I want to express my deepest sympathies and heartfelt condolences to the Japanese people and Government, most especially those who lost family and friends in the earthquake and subsequent tsunamis.

Japan is one of the most generous and strongest benefactors, coming to the assistance of those in need the world over.

In that spirit, the United Nations stands by the people of Japan and we will do anything and everything we can at this very difficult time.

We will be watching closely as the aftershocks are felt across the Pacific and South-East Asia throughout the day.

I sincerely hope that under the leadership of Prime Minister Kan Naoto and the full support and solidarity of the international community, the Japanese people and Government will be able to overcome this difficult time as soon as possible.

日本政府と国民に心から哀悼の意を表します。日本がこの重大な試練を乗り越えられると確信しています。 [Translated from Japanese: To the Japanese people, I offer my sympathy and heartfelt condolences. With greatest respect and my best wishes, I know that they will overcome this terrible tragedy.] 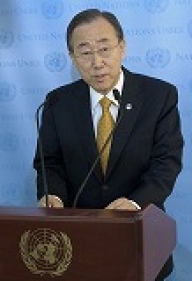