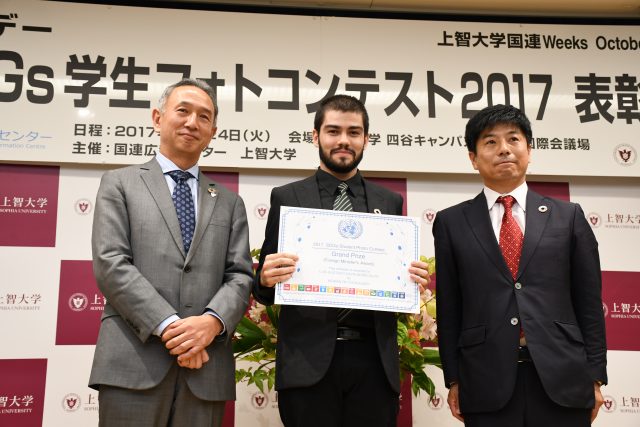 Mr. Luis Gustavo Cavalheiro Silva (centre) from Brazil wins the Grand Prize for his photo of “WOMAN OF COOCASSIS”

Mr. Luis Gustavo Cavalheiro Silva from Brazil wins the Grand Prize for his photo of “WOMAN OF COOCASSIS!” His photo depicts a woman employed by a socio-economic organization called the COOCASSIS, who collects recyclables. “Thanks to the community’s support, the woman can support her family and at the same time contributes to keeping the community environmentally sustainable. I saw in her work the valuable message that the SDGs are conveying, and I thereby wanted to share my feelings with others.”

The United Nations Information Centre, Tokyo (UNIC Tokyo) and Sophia University jointly held the Sustainable Development Goals (SDGs) Student Photo Contest. Over 1,000 entries were received from students from 73 countries, including Japan, Brazil, and Bangladesh, which was about 60% increase compared to the last year’s initial contest.

“The contest has encouraged students from all over the world to capture a moment that reflects their own ideas and views on SDGs. In their photos, we find the power to communicate humanity’s urgent issues to everybody,” said Kaoru Nemoto, Director of UNIC Tokyo at the beginning of the award ceremony which was held on the UN Day (24 October) at Sophia University in Tokyo. Representing Sophia University whose mission is “Sophia – Bringing the World Together,” President Yoshiaki Terumichi stated that, “We are proud to have received a larger number of entries globally this year.”  “I was surprised by quality photos submitted by the students,” stated Leslie Kee, who heads the judging panel, and continued, “We have selected photos to best reflect the young generation’s enthusiasm to achieve the SDGs.”

The full list of prize winners are as follows:

TOGETHER Award [as part of TOGETHER campaign to create a society that celebrates the diversity created by embracing refugees and migrants.]

・Thai Nguyen (Vietnam, An Giang University)
“HAVING WATER, HAVING SMILE AND HAVING LIVES”

・Erika Wakabayashi (Japan, Keio University)
“A KITE IN THE SKY”

・Partha Banik (Bangladesh, University of Chittagong)
“EDUCATION FOR ALL 2”

❖ Judging Panel for the TOGETHER Award:

❖ Judge for the Concept Award: