GENEVA / TOKYO (14 January 2015) – The United Nations Special Rapporteur on the situation of human rights in the Democratic People’s Republic of Korea (DPRK), Marzuki Darusman, will visit Tokyo from 19 to 23 January 2015 to follow up on his previous information-gathering mission in April 2014.

Since his appointment in 2010, the Special Rapporteur has made several requests to visit DPRK; however, access has so far not been granted. Mr. Darusman has been visiting other countries in the region such as Japan, Thailand and Republic of Korea.

“This new visit takes place in the context of recent major developments at the UN General Assembly and Security Council on the situation in the DPRK, with significantly increased scrutiny by the international community of the actions of the North Korean Government,” said the independent expert appointed by the UN Human Rights Council to investigate and report on the situation of human rights in the DPRK.

“More than ever, I will pay particular attention to the issue of abductions, which remains of grave concern to me and to the international community,” Mr. Darusman stated.

While in Japan, the Special Rapporteur is scheduled to meet with the Minister for Foreign Affairs, the Minister for the Abduction Issue, families of victims, representatives of non-governmental organizations, the diplomatic community and other stakeholders.

At the end of his visit, on Friday 23 January, the UN human rights expert will hold a press conference at the Japan National Press Club in Tokyo, at 14:00.

The information the Special Rapporteur will gather during his mission to Japan will be reflected in his report to the Human Rights Council in March 2015.

Marzuki Darusman (Indonesia) was appointed Special Rapporteur on the situation of human rights in the Democratic People’s Republic of Korea in August 2010 by the UN Human Rights Council. He has served in a three-member UN Commission of Inquiry to investigate the assassination of former Pakistani Prime Minister Benazir Bhutto and chaired the UN Secretary General’s Panel of Experts on Sri Lanka. In March 2013, the Human Rights Council designated Special Rapporteur Darusman to serve simultaneously on a three-member Commission of Inquiry to investigate the systematic, widespread and grave reports of violations of human rights in DPRK. Learn more, log on to: http://www.ohchr.org/EN/HRBodies/SP/CountriesMandates/KP/Pages/SRDPRKorea.aspx

For media inquiries related to other UN independent experts in Geneva: 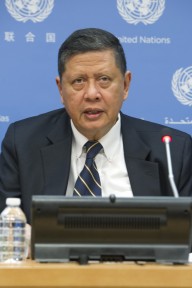