World Refugee Day is an expression of solidarity with people who have been uprooted from their homes by war or persecution.

The latest figures from the UN Refugee Agency, UNHCR, show that at least 65.6 million people — 1 of every 113 members of the human family — have been forcibly displaced within their own countries or across borders.

While Syria remains the world’s largest source of refugees, South Sudan is the biggest and fastest growing new displacement emergency, with 1.4 million refugees and 1.9 million internally displaced, the vast majority of them under 18 – a further blow to the future prospects of the world’s youngest nation.

Behind these vast numbers lie individual stories of hardship, separation and loss; of life-threatening journeys in search of safety; of gargantuan struggles to rebuild lives in difficult circumstances.  It is heartbreaking to see borders being closed, people perishing in transit, and refugees and migrants alike being shunned, in violation of human rights and international law.  The human cost is profound: millions of jobs lost, millions of children thrust out of school, and lives haunted by trauma and intolerance.

I have called for a surge in diplomacy for peace to prevent new conflicts from emerging and escalating, and to resolve those that have already had their calamitous impact.  I am also appealing to Member States to do far more to protect people fleeing for their lives, buttress the international protection regime, and find solutions so that people are not left in limbo for years on end.

The New York Declaration, adopted nine months ago, maps out a comprehensive and equitable way to address refugee and migration challenges, building on long-established laws and practices.  The UN’s “Together” campaign offers a platform to promote respect safety and dignity for refugees and migrants — and crucially, to fortify social cohesion and change false and negative narratives that compound the challenges faced by refugees and their hosts.

Throughout history, communities living next to crisis zones, as well as those far from the frontlines, have welcomed the uprooted and given them shelter – and in return, refugees have given back. Today, 84 per cent of the world’s refugees are hosted by low- or middle-income countries.  We cannot continue to allow a small number of countries – often the world’s poorest — to shoulder this weight alone.

This not about sharing a burden.  It is about sharing a global responsibility, based not only the broad idea of our common humanity but also on the very specific obligations of international law.

The root problems are war and hatred, not people who flee; refugees are among the first victims of terrorism.

In recent weeks and months, I have visited refugees and displaced people in Afghanistan, Somalia and elsewhere.  Sitting with these men, women and children, I was impressed by their fortitude despite having had their lives completely upended.  On World Refugee Day, let us all try to stand in their shoes, and stand up for their rights and our shared future. 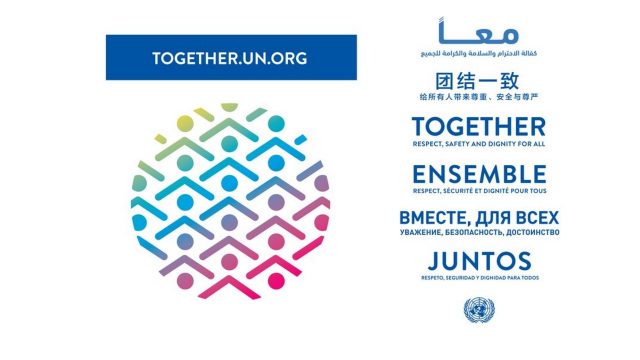