Over the course of more than four centuries, some 15 million Africans were taken from their homes across Africa and transported by force to the Americas.  The number of people purchased by slave traders was even higher.  Those slaves who survived were bought and sold, stripped of all dignity, denied all human rights.  Even their children could be taken from them and sold for the profit of their “owners”.  The Transatlantic slave trade remains a monstrous crime and a stain on human history.

This year’s Day of Remembrance pays particular tribute to the many women who suffered and died during the slave trade.  They experienced appalling violence, including sexual and reproductive enslavement, forced prostitution, repeated sexual assault, as well as forced childbearing and the sale of their own children.

Yet women slaves played a key role in maintaining the dignity of their communities.  Too often their leadership and brave resistance have been underestimated or forgotten.

Tragically, slavery has still not ended.  Slavery stubbornly persists in many parts of the world, in the form of forced labour, trafficking, sexual exploitation or captivity in slavery-like conditions.  These despicable practices could not exist without deep-seated racism.  It is absolutely vital that the dangers inherent in racism are made crystal clear to all.  The Department of Public Information’s Remember Slavery Programme educates about the Transatlantic slave trade and how intolerance can easily shift from an attitude into acts of hatred and violence.

To mark this International Day, I will unveil a permanent memorial at United Nations Headquarters in New York to honour the victims of slavery and the Transatlantic slave trade.  Built on the Visitors Plaza, the “Ark of Return” will bring home to people from around the world the terrible legacy of the slave trade.  It will help us heal as we remember the past and honour the victims.

On this important Day of Remembrance, I call for a renewal of our commitment to end modern slavery, so our children will live in a world free of racism and prejudice with equal opportunity and rights for all. 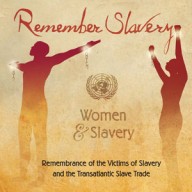