The Secretary-General will travel to Japan, arriving in Tokyo in the evening on Wednesday, 13 December.

On Thursday, 14 December, he will meet with Prime Minister Shinzo Abe, as well as with members of Parliament and civil society.

The Secretary-General will also address the Universal Health Coverage Forum, which is being co-organized by the Government of Japan, the Japan International Cooperation Agency (JICA), the World Bank Group, the World Health Organization (WHO), UNICEF and the International Health Partnership for UHC2030.

He will give a lecture at Sophia University on the theme, “Global challenges – the role of human security,” and meet with students afterwards. His press conference will be held at Japan National Press Club as the conclusion of the visit.

The Secretary-General will return to New York on the evening of Thursday, 14 December. 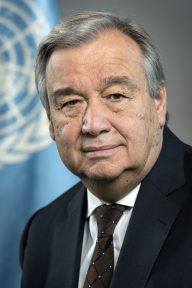