In 1952, against a background of frequent outbreaks of infectious diseases such as dysentery in post-war Japan, Saraya was the first Japanese company to develop and commercialize liquid soap and containers for liquid soap. It produces and sells soap, detergents, disinfectants, and other products, and some of its key products include the natural detergent “Yashinomi Detergent” and the medicated liquid soap “Shavonet.” In 2010, Saraya initiated a “Wash a Million Hands Campaign” in support of UNICEF’s “National Hand Washing Campaign” in Uganda.

Since 2012, Saraya has been using the Preparatory Survey for Base of the Pyramid (BOP) Business Promotion system, provided by JICA, to implement a production and sales plan for an alcohol hand sanitizer which is effective in the prevention of viral infections. In February 2012, it embarked on a feasibility study for the commercialization of the product.

Saraya has incorporated a local subsidiary, Saraya East Africa Co., Ltd. The company is putting effort into preventing the spread of healthcare-associated infections by promoting the use of alcohol hand sanitizers, which is still an uncommon practice in Uganda and among the African population in general. The use of alcohol hand sanitizers is limited to only a few of the major hospitals in Uganda, and reports indicate that in many other hospitals, midwives and doctors still do not disinfect their hands even when handling new-born babies. Such medical practices are a key factor contributing to the spread of healthcare-associated infections. According to WHO, the morbidity rate for healthcare-associated infections falls in tandem with the increase in the volume of alcohol hand sanitizer used. Through surveys conducted in cooperation with JICA, Saraya is conducting educational activities in two hospitals in Uganda, and is currently monitoring the results of this initiative. It is observing and verifying weather alcohol hand sanitizer is acceptable in the local community, how much hand sanitizer would be needed in hospitals, and other related concerns.

Sugarcane production is a thriving industry in Uganda. Saraya is drawing up a BOP business plan that involves the use of sugarcane molasses produced in Uganda in the production of alcohol hand sanitizers that have the same composition as the quick-drying hand sanitizer “Virus Stella V” (Category III OTC drug), which is sold commercially in Japan. Producing disinfectants locally, using alcohol made from molasses that are generated in the sugar-purification process, is said to be an effective way of selling disinfectants to local public hospitals. In addition to reducing the cost of production, it is also expected to contribute to the creation of employment as local production is involved.

Prevention of infectious diseases, enhanced awareness of hygiene and sanitation, creation of employment in the local community, revitalization of industries

The Government of Uganda plays a leading role in organizing and promoting the “National Hand Washing Campaign.” This campaign aims to raise awareness among the Ugandan population about using soap to wash their hands. In line with this campaign, Saraya plans to call for greater use of alcohol hand sanitizer among medical practitioners. 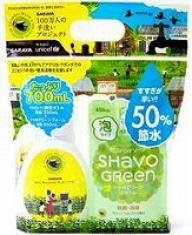 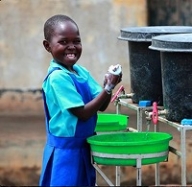 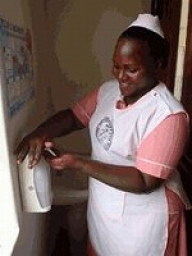