The 5th Tokyo International Conference on African Development (TICAD V) was held in the City of Yokohama for three days starting 1 June 2013. TICAD V was co-organized by the United Nations (UN), and the event was graced by United Nations Secretary-General Ban Ki-moon. Through TICAD V, the United Nations Information Centre (UNIC) hopes to raise the level of interest toward Africa among as many Japanese people as possible.

To that end, Japanese companies that are participating in the United Nations Global Compact presented an introduction to the businesses that they are currently conducting in Africa. The case studies were compiled in cooperation with the Global Compact Japan Network (GC-JN).

TICAD is an international conference initiated by the Japanese Government in 1993. Co-organized by the UN, World Bank, and other organizations, this summit meeting on African development is held once every five years. In addition to the summit meeting, follow-up processes are also in place to ensure the faithful implementation of commitments made at the meeting.

Project to improve nutritional conditions in Ghana, through the use of “KOKO Plus”

Ghana, which has witnessed continuing economic development in recent years, still faces the problems of poverty in its rural areas. Development deficiency, such as low weight and height, is an issue which plagues infants. In Ghana, the main staple for babies during their weaning period is porridge made from fermented corn and sugar called “KOKO”. However, this food does not provide an adequate amount of proteins and nutrition which growing children need, and is seen as a key factor contributing to the delayed growth of children. To eliminate such problems, Ajinomoto aims to provide solutions through the establishment of its social business.

Ajinomoto has launched a project aimed at improving nutritional conditions during the weaning period, and has formed the following partnerships with various organizations as part of this project.

(1) Since 2009, Ajinomoto has been developing KOKO Plus in collaboration with the University of Ghana and INF, an American NPO. KOKO Plus is a nutritional supplement that is to be added to KoKo, the traditional Ghanaian food for weaning babies described above. This supplement is mainly made from soybeans produced in Ghana, with amino acids, vitamins, and minerals. Each packet provides infants with the nutrition that they need in a day.

(2) In April 2011, Ajinomoto concluded a Memorandum of Understanding with the Ministry of Health, Ghana. This agreement facilitates better understanding of the significance of this project, and also brings both sides’ agreement on the implementation of tests that will be used to verify the efficacy of the product and nutritional education.

(3) Through the BOP Inclusive Business Support system in cooperation with JICA, Ajinomoto receives support for conducting market research on nutritional supplements in Ghana, developing business models, and formulating business plans. Ajinomoto is also the beneficiary of support from USAID in the form of knowhow and funding approximately US$600,000, toward the implementation of a study to create a distribution model aimed at expanding the consumer base and promoting the widespread consumption of KOKO Plus.

(4) Ajinomoto selected Yedent Agro Group of Companies Ltd., a local food products company experiencing partnership with the UN World Food Programme (WFP). Trial production was launched in the second half of 2011, and is still underway.

Improvement of nutritional conditions for children, promotion of local agriculture, improvement in the capacity of local companies, creation of employment

Growth deficiencies arising as a result of inadequate nutrition during the weaning period is a severe problem in Ghana and other parts of Africa. Through its social business model, Ajinomoto has proven that it is possible to come up with solutions for social issues such as nutritional deficiency, by building win-win relationships with the social sector, including NGO groups. It aims to launch production of KOKO Plus in earnest in Ghana, and plans to expand the project to other developing countries that facing a similar problem. 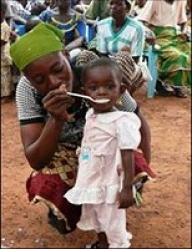